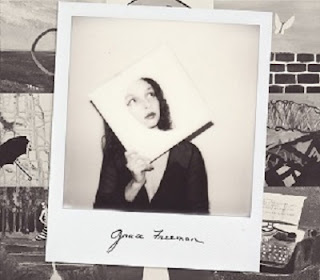 This is a release that a lot of people will get behind without much persuading. Grace Freeman’s talents shine through on each of Shadow’s eleven cuts and she has a naturalness as both a performer and writer that is a rare gift in any era. Don’t make the mistake of lumping her in with the gaggle of female singer/songwriters who’ve appeared in the last two decades – Freeman possesses a singular, transformative talent that certainly takes in the right influences but, ultimately, speaks with its own certain and convincing voice. She brings in some other instrumentation on various songs, but Freeman confines much of Shadow to making its mark via her voice, piano, and acoustic guitar. These songs are so good that scarcely anything more is required. She inhabits these spartan musical landscapes like a knowing, generous spirit and unstintingly gives herself to the audience.

“Oliver” begins Shadow on a muted note, but the artistry is undeniable. Few songs of this ilk in recent memory share such an obviously sympathetic bond between the musical arrangement and vocal. Freeman’s voice locks into the guitar from the first and her phrasing varies enough at critical points during the performance to make for some interesting juxtapositions. “Shadow” has a quasi-classical air thanks to the inclusion of piano, but this soon gives way to the inclusion of drums and bass that takes the song into a more high brow pop direction. It’s one of the most successful tunes on Shadow and one can only assume Freeman agrees since it comes so early in the album’s running order. “Trying to Say Goodbye”, like the later “Dreams”, doesn’t overtly pursue the suggestion of pop in performance, but it certainly has commercial appeal in a way that other songs on Shadow do not. The pained lyrics take on an unusual quality, almost playful, when placed against the arrangement on “Trying to Say Goodbye”. The acoustic guitar has a near gypsy flair on the later “Dreams” and it prompts Freeman to respond with one of her most invigorating vocals on the release.

“Another Long Night” and “God Forbid” are two of the best songs on Shadow thanks to lyrics just as strong as the musical ideas driving each track. The former song focuses on the marriage between Freeman’s voice and entertaining acoustic guitar – the unusual bluntness of the lyric serves it quite well and Freeman makes no real attempt to sweeten its sentiments. “God Forbid” is reminiscent of Regina Spektor’s songwriting, but Freeman is a far clearer lyricist while still retaining the capacity for a poetic turn of phrase. This is a collection that will stick in the memory for some time to come thanks to the virtuosic songwriting clinic she puts on and the burning focus we sense applied to each of Shadow’s eleven songs. Grace Freeman has struck gold with this one.
at September 20, 2017